Posted on June 1, 2014 by marklosingtoday

Would you believe, we’ve lost the citation links to this which is a bit frustrating because we want one. First in a series of three cassette releases being put out triangle sounds attempting to replicate, demystify and add to your sum total knowledge of all sound things spore, shrooms and drone related (musically that is). Entitled ‘Unearthed Volume 1 – sporulate’ this ultra limited cassette features nine such aural trip treats, bearing no titles, no artists and no fanfare they are distinguished only by the puzzling ident ’cap side’ (of which there are 8 suites) and ’mud slide’ – all we know aside that is that there’s a loose connection to feathered cayote’s Ulrich Rois. As to the sounds themselves, a delightful peak as were beneath the minimalist electronica undergrowth employing the full spectrum of generic bending so that you get the impish bubble and squeak doodles of Louis and Bebe Barron on track 8 albeit here as though on safari on some alien vast land, ominous trip out dream states on track 2, mellowing lunar eclipse transmissions (track 1)and frequency noodling radiophonic weirdness (track 5). That said it’s the side long adventure undertaken on the ‘mud slide’ that provides the sets centrepiece exploring sounds vast un-chartered inner worlds in a kookified symphony of frequency manipulating manifestations that for the best part sound not unlike finding yourself eavesdropping on a chattering nursery class of excitable R2D2 offspring before that is matters take a darker detour and recalibrate into an as were battle plan headed up by some cosmic domination seeking Reptilian hive consciousness. http://www.soundcloud.com/trianglesounds/sets/unearthed-vol-1 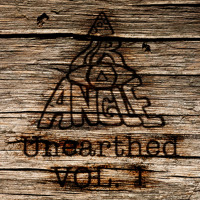