Posted on August 14, 2016 by marklosingtoday

Many thanks to the guys over at cassette label Sonic Entrails for popping over in the post the imprints first two tapes releases. Foreboding and forbifdding stuff it be and something we mentioned a little while back here when we had cause to set our ear to one of its key note tracks ‘sin purifying fire’ by John 3:16. ‘Phonic Entrails’, the labels inaugural release, is a limited to 30 cassette release – ours in case you are taking notes is #15 – a hosts a gathering of underground talent – 12 all told – operating on the outer edges of the underground all it seems crafting bleak symphonies for a post apocalyptic fall. The collection opens ominously with DNP. I think its safe to say its been a while since we had the pleasure, or should that be displeasure, of having groove from DNP morbidly sucking to its dark lair where once there was light, a brooding encounter, ‘pigeon park’ glowers with calculated menace issuing forth pulse waves of dread born drone. Ushered forth from the same kind of post apocalyptic hinterland as once upon a time advanced the Revenant Sea, there’s an almost quietly radiant jubilance working through the head bowed melanchioly of the bogs of augiska’s ‘I rise in beltraine, turn to ash in samhain’ that hints of the soft turn beauty and hypnotic delicacy of a youthful Kranky records set. Those fancying, what in essence amounts to, an eleven-minute mind wiping event, may do well to be lulled by the skree controlled pulsar activity of Mutate’s flsatlining ‘plex’ once that is its set the navigation points of its sonic tractor beam towards your headspace before getting to work applying its trance toned EAR dreammachine. Adored around these parts ‘before and after’, the latest salvo from [owt kri], is a bitter sweet end game, the cosmic lights fading to darkness at the approaching euphoric burn of an advancing heavenly army of celestial chimes. Futile escapist front – I do love the name incidentally – serve up ‘decay2deth’ which in terms of title aptness perfectly conveys the fact that this is no easy walk in the park, again something you’d imagine cooked up by one-time Revenant Sea co-consoiator Roadside Picnic or at the very least falling out of the much missed Scotch tapes imprint a few years back. ‘splintered shards of memory’ by Soiled brings matters into lighter terrains and focus albeit loosely, all twinkling keys subdued and lost to a hazy fog, tis all tearfully aching stuff. From a personal point of listening view we must admit being a tad fond of peter heselton’s obliquely fracturing ‘I wash my hands in the blood of those angels’ not least because amid the doom church bells clangs there’s a frazzled atonal groove splintering within that had us much in mind of Bruce Russell. Admirers of all things Radiophonic Workshop weirdness might do well to savour the prowling eeriness of Sktech Event’s ‘skrech drone AAA’ though as a cautionary word of note may we suggest you do so from the safe comfort afforded from the back of a sofa with the lights on even though it may be daytime. As said previously, we mentioned John 3:16’s ‘sin purifying fire’ way back at https://marklosingtoday.wordpress.com/2016/06/15/john-316-9/ – a desert fired ghostly snake charming widescreen arabesque carved in the image of a youthful godspeed. Next up, something toned in a prenatural primitive tongue from tunnels of ah whose head to head with john e smoke ‘phoenix and worm regenerated’ casts something of a post apocalyptic afterglow by way of a stilled symphonia comprised of shimmering drone ghost lights which neatly bleeds into phantom signals shadowy ‘aiwa ss’ and finds the head phonic terrain somewhat relocated to the outland corridors linking a host of 80’s filmic reference points most notably ‘the thing’, ‘blade runner’ and ‘the terminator’. Red clouds are left to bring matters to a close with the subterranic leviathan that is ‘empire collapse’ navigating its way through a sparsely set micro sound universe to bathe your listening space in a reverential aura much like a chill pill visitation summoned together from various the insect explosion and labradford types. https://sonicentrails.bandcamp.com/album/phonic-entrails 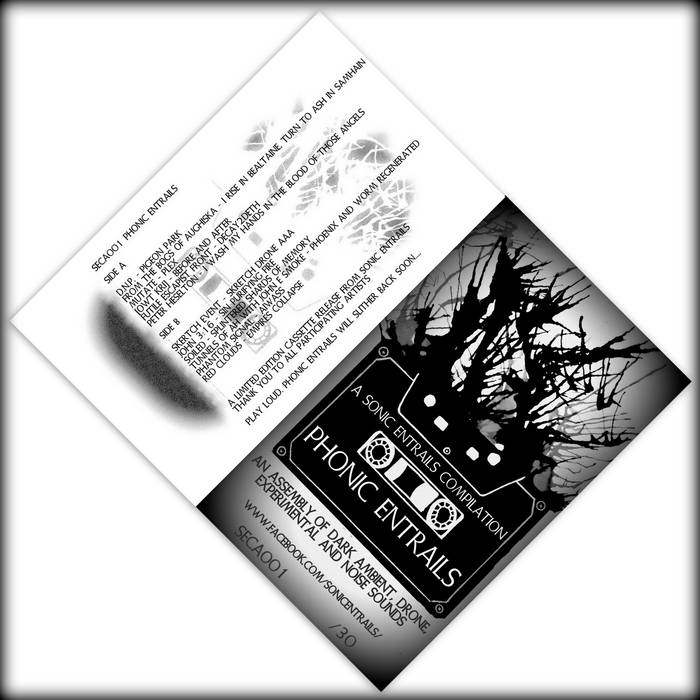