first great album of the year, now there’s a hefty notice to be saddled with and have to live up to, yet it’s a description that’s well deserved for this debuting full length from Barrett’s Dottled Beauty appears to emerge from a rarefied fog that’s far removed and remote of pop’s populated path. The collaborative work of an Electroscope and a Kitchen Cynic, ‘owls in her eyes’ comes pressed in a strictly limited 80 only wax variation housed in hand made / hand numbered collage sleeves. Upon its grooves four soft psyche siren-esque psalms quietly stare, seduce and enchant, beguilement doesn’t begin to touch it, ghostly drone mosaics, which as reported on previous encounters, arrive trimmed in classicist vintage whose lineage ripples to a dawning of time whilst sonically balanced on a finite point located somewhere between the primordial psych folk utterance’s of Alphane Moon, Ghost, our glassie azoth and the bewitching trips of George Harrison’s ‘blue jay way’ – non more so is this better exemplified than on the title track itself, buried in the twilight mists hushed murmurs rise and float amid washes of waking atmospherics, the effect very much tuned into some hitherto lost Nico-esque ghost folk mystic. But then to attempt to describe the overall effect of ‘owls in her eyes’ is to liken it to spirit walking through a dream, for here the melodies float in part, in ethereal rapture and wood whittled wooziness to dissipate and dissolve in the ether, delightful spectral symphonies weaved in the wind and arrested upon an unmoored fluidity that sees them shape shift with an alluring eeriness that’s both seductive and enchanted. Here the frost chipped ice sculpturing of ‘the cynic, the dipper and the thrush’ shimmer hazily softly unfurling their kaleidoscopic mantra drawing upon a sonic mysticism that threads elements of Dodson and Fogg with John Fahey. Given its sparse detailing ‘forvie’ – frankly the best thing here it should be said – reveals itself as a lushly toned cosmic ghost light, a celestial rapture graced in hymnal hues and chill tipped choral coos all traced upon lunar pulsars and kissed with an otherly presence. ‘the rain has come in misty showers’ draws matters to a close and as such crafts out something bruising, crushed and lovelorn, its mesmeric and shadowy folk noir toning teased in a fracturing and surrendering beauty that hints of both Preterite and Dead Can Dance whilst similarly soured in the fragile hollowed majesty of Glissando. Irrefutably essential. https://barrettsdottledbeauty.bandcamp.com/album/owls-in-her-eyes 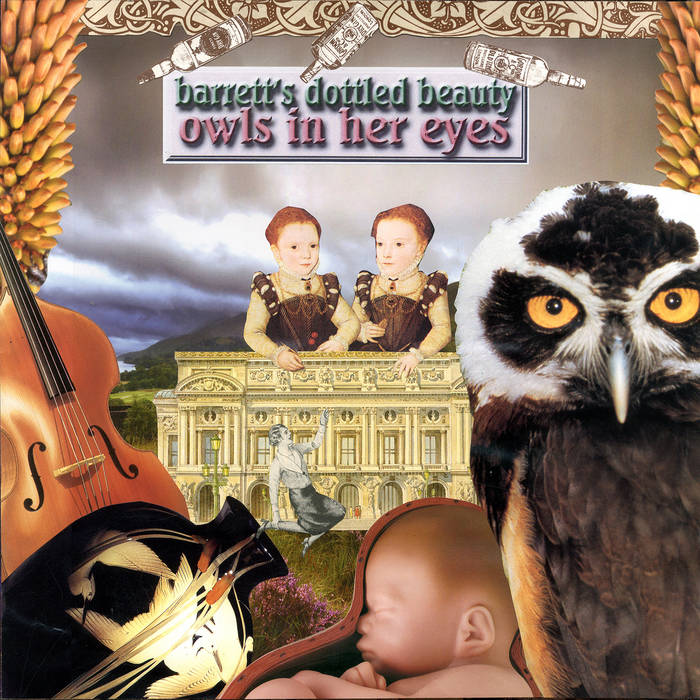 This entry was posted in groovy bastards..., Uncategorized and tagged barrett's dottled beauty. Bookmark the permalink.