Posted on February 19, 2017 by marklosingtoday

Apologies for being a little late to the party with this, released at the tail end of last year was the second annual ‘EurNoVision’ compilation, a European wide gathering of outsider talent and impish folk three of whom we’d already mentioned in passing in previous dispatches when we attempted to run the critical eye over the sets pre-release teaser tasting – see  https://marklosingtoday.wordpress.com/2016/12/12/eurnovision-2016-2/  – or below if you’re feeling a little non-compliant and fuzzy with the cut n’ paste mullarkhy – as hinted the release plucks from the continental map the obscure, the quietly genius and the just plain obscure in an attempt to befuddle, beguile and bewitch the would be listener. As noted earlier we’ve already marked the entries from the Gathering Doubt, Can Can Heads and Logosamphia – hailing from the UK, Finland and the Netherlands respectively – see above below or below. As to the rest of the field, Catatonia based JGG do a neat line in, what might be best described as crookedly wiry radiophonic rumba which unless these ears do deceive finds the delightfully skittish ‘D2’ applying itself to the curious double headed influence of both John Lurie and a pre-electronic boffin powerhouse era Raymond Scott. Admirers of the lo-fi perky pop effervescence of Sarah records – well loosely shall we say – may way find yourselves succumbing to the wayward fizziness of Il Culo Di Mario’s delightfully wonky electro buzz cheeriness that is ‘Stratega’. B-movie fright wigged kookiness from the excellently named Marie Mathématique with ‘L’homme-éléphant’ which I must admit has a certain 60’s French pop chic snazziness about its wares albeit as though rethreaded by the Addams Family with Lurch taking centre stage of the trippy organ. Ett Nytt Liv, the Swedish entry to these crooked proceedings bring the rather spiffing but clearly out of its tree ‘Glöm Inte Din Medecin’ – something we’d have expected to stumble cautiously out of the Bearsuit imprint with it warbling, cooing to a strangely alluring kaleidoscopic palette of dissipating lunar exotica. Russia’s AWOTT detune the listening space with some sterling though quite clearly bonkers art pop hi-jinxing even bringing with them from the sounds of things several household tools purloined from a nearby shed and into the bargain cook up a twisted opera to which fans of La STPO might do well to check out. Chanelling Distel in the guise of Le Bleu, the oompah oddness of the baroque mischief of ‘Glad to be a Freak @ 40’ by Mr Diagonal’s Midlife Crisis has something of a Viv Stanshall eccentric impishness about its personage. I’ll just say that Rita Braga ‘Erosão’ is simply breathless, beautiful frosted chimes, it ioffers a dream dazed slice of wood crafted folk enchantment trading in a noir traced 60’s shimmering, think Mary Hopkins meets Seafina Steer and you’ll be as near to close as you can be. From Turkey, R.A.N’s ‘ The Old One’ manages to culture a darkly path whose shadow lined framing  sits somewhere upon a ‘seduction’ era Danse Society casting albeit as though set upon by Clock  DVA. I don’t mind admitting to being a tad smitten by the Irish based French Radio Constellation’s gloriously kooky sore thumb ‘If the Internet Got Wet’, a delightfully daft electro weirdo that imagines secret studio get togethers between the flying lizards meets …and the native hipsters, will drive you to distraction. Sarah Rasines on the other hand appears adept in the exploration of sonic micro worlds, very Pimmon in design and detail, ‘Tommy Hilfiger’ is a glitching terror that forms the missing link between terrains occupied by the unexplained sounds group and the radiophonic experimentation of EAR. Those preferring their sounds purred in pulsing vintage electronica might do well to turn your ear space to Torstn Kauke ‘Warten Warten Warten’ – chilled out clubland grooving Kraftwerk anyone. Hailing from Denmark, Kold Front’s wonderfully 80’s sparsely toned chill pop dream dazer ‘Sov Nu’ had us rifling around for our Peter and Sophie Johnson platters for swift comparison. Somewhere else Serbia’s EPP do a rather obliquely nifty take on Devo courtesy of ‘hologram’ had of course they’d ever encountered Landscape in the studio under the cover of night. Rounding up the pack on this extremely intriguing collection Poland’s Dancing Deadlips take matters to the end groove with the superbly mesmeric ghost light that is ‘You, Azure Bird’ into the bargain immersing itself deep in tripping psychotropic happenings which had we not known any better would have guessed it was the work of Virginia Wing rethreading the legendary Elektra score ‘the Zodiac – Cosmic Sounds’. https://eurnovision.bandcamp.com/album/eurnovision-2016

long mooted and now actually here and just in time for Christmas, the second annual EurNoVision gathering, just a brief whistle whetting brief introduction while we free up time to delve deep for a full critical MOT. Featuring 17 tracks culled from the cream of the outsider community for this visit we’ve randomly plucked from the lucky bag just three well heeled samples of sonic bedevilment starting out with Dutch dudes Lugosamphia whose frazzled Dadaist electro cutie ‘eurivium spectra nonsim’ has the kind of insanely addictive floor hopping kookiness that might suggest the sinister doodling of the Flying Lizards being impishly set upon by those crooked pop eccentricists Landscape albeit as rephrased through the candy kaleidoscopic viewfinder of Midwich Youth Club. Occasional interrupter’s of these musings the Can Can Heads serve up Finland’s stab at the honours with what is for them, the rather mellow and straight ahead ‘efekto black ice’ – still sounds menacing though removed of the frazzled and wayward quotient whilst all the same sparring and jarring to a Shellac / Jesus Lizard combination jab. Finally for this brief visitation, the UK entry comes courtesy of the delightfully warped the Gathering Doubt whose curiously woozy hallucinogenic ice carved pretty ‘Christmas is broken’ appears to emerge from a secret place inhabited by William D Drake, a baroque lullaby twinkled in a fading bucolic nostalgia all set to a charmingly chirping musical box motif that hints of the creative spirit of Beaulieu Porch. https://eurnovision.bandcamp.com/album/eurnovision-2016 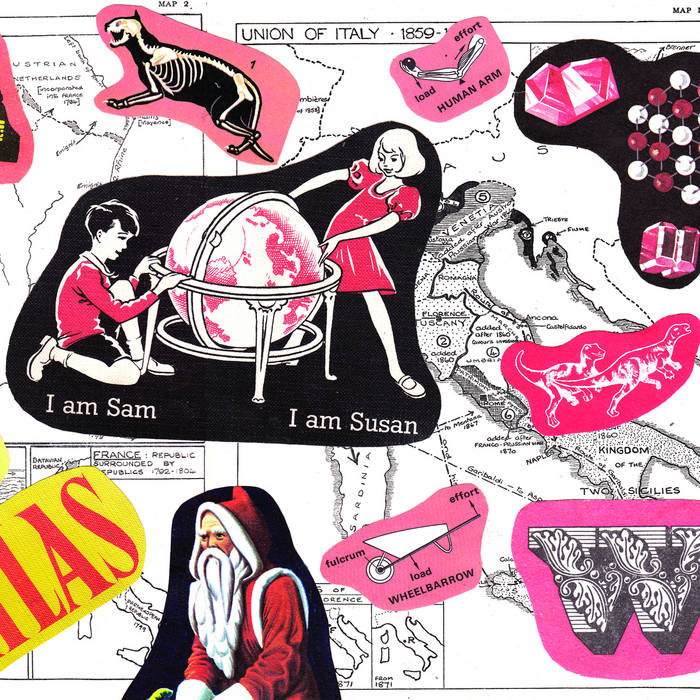