Quatermass and the Pit

Due to unforeseen financial setbacks this year, we had to depressingly curb our RSD 17 selection / wants list. It proved to be a no brainer in the end for when the dust and shock settled, we did eye a brace of releases from Silva Screen celebrating the 50th anniversary of the Hammer studios release of ‘Quatermass and the Pit’ upon the big screen. ‘Quatermass and the Pit’ had long been considered for the silver screen since the early 60’s, the third of, what turned out to be, four Quatermass stories, written by Nigel Kneale who would later go on to pen the acclaimed ‘the Stone Tape’, its origins can be traced back over a decade earlier whereupon ‘Quatermass Xperiment’, ‘Quatermass II’ and of course, ‘Quatermass and the Pit’ where all commissioned and made for 50’s television by the BBC. This collection, an RSD17 exclusive, is the first time the full ‘Quatermass and the Pit’ score has been set to official vinyl release, available on four different coloured wax variants, ours is on red in case you were taking notes, features liner notes and photographic pull out featuring stills from this legendary cult film which this year celebrates its 50th anniversary. For those unaware of its existence, the story goes, building works to extend the underground line unearth initially, bones of a prehistoric man and then a saucer shaped object, scientific tests and deductions estimate all have lain undisturbed for over 5 million years, its discovery sets off a chain of events whereupon it soon becomes clear that the objects origin is not of Earth but Mars and that the course of humankind as we know it has been shaped by the Martians to the point that our own evolution and even our beliefs, customs and folklore has been to an extent been intrinsically linked and guided, worse still is that this influence is still apparent despite the occupants of the craft having lain long dead for millions of years and that somehow the craft itself has soaked up all the hate, the fear and the memories of its crew acting as were as a psychic sponge. As to the soundtrack itself, composed by Tristram Cary, it mixes bombastic symphonic arrangements akin to Hermann and Goldsmith with electronic musique concrete, both disciplines bringing to the score their own unique element of suspense with the sweeping arcs of the string / wind swirling orchestral elements initiating both something as equally evocative as it is stirring and pitched with tension – the end credits in particular coming possessed of a classic Hammer House toning traced in beautifully lush pastorals –  while the sparse though shadowy minimalist electronic suites with their scabbing pulsars and heavy hypno-grooving accentuate perfectly the oppressive nature of the psychic attacks pressing down upon the mind.  We’d say essential but i’m gathering you’ve already worked that out for yourself. 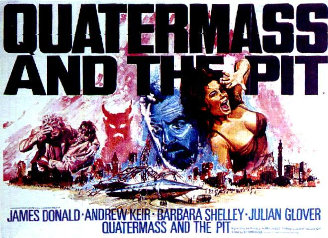 This entry was posted in groovy bastards..., Uncategorized and tagged quatermass and the pit, silva screen, tristram cary. Bookmark the permalink.