Posted on September 4, 2017 by marklosingtoday

Okay you’d better get your backsides in to gear if you want one of these. Due for October release, this is the latest from the esteemed Eggs in Aspic imprint, a label who it seems appear content to persistently put out nuggets at stupidly regular intervals. This one, on their chosen format of play, that’ll be a cassette, is strictly limited to just 35 copies and features a cornucopia of home recordings by a certain Pete Gofton in one of his many alter egos, this ‘un being the All Golden. Now long time regulars to these badly written and ill punctuated missives, might well recall the name, not least because we mentioned them / him in passing early last year – see here https://marklosingtoday.wordpress.com/2016/03/07/the-all-golden/ and there https://marklosingtoday.wordpress.com/2016/04/01/the-all-golden-2/ – anyhow, this one be called ‘424’ EP. Just two tracks on the preview pane, ‘taking sides’ being a superbly lo-fi’d slice of new wave dayglo that ripples, swerves and purrs prickly with the razored effervescence of a youthful Ariel Pink with an Apples in Stereo fixation. However, for us it’s ‘Air’ that nails it, a bubble grooved slice of woozy kaleidoscopia dreamily wired to a deliciously dissipating lazy eyed stoner grooving, which unless our ears do deceive, sounds as though it’s been smoking whatever the hell Mercury Rev where when crafting ‘yerself is steam’. https://eggsinaspic.bandcamp.com/album/424-ep 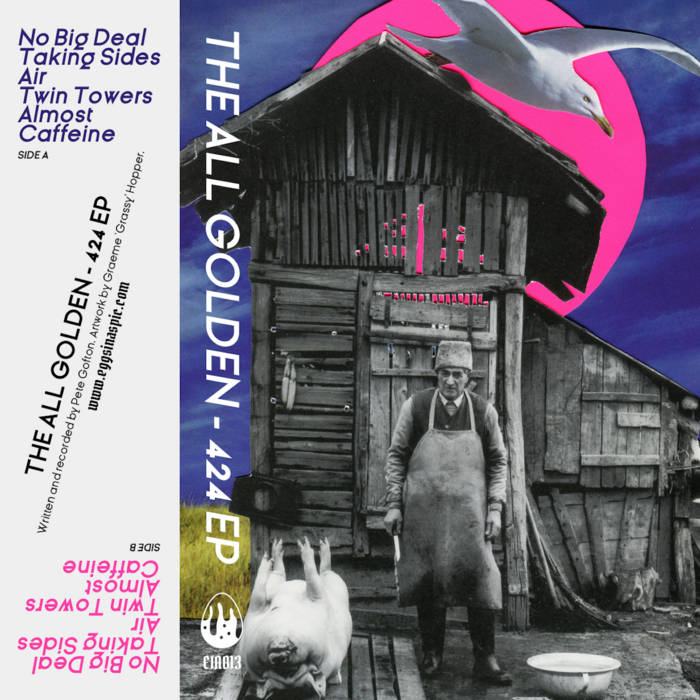 This entry was posted in groovy bastards..., Uncategorized and tagged eggs in aspic, the all golden. Bookmark the permalink.