Posted on October 8, 2017 by marklosingtoday

Been a missive or three since we featured anything Fruits de Mer related that we half suspected you folk might be suffering withdrawal symptoms. Fear not for new Sendelica happenings have come our way. Now the keen eyed among you, may well have noted for some while now, talk of a Sendelica special due to land around Christmastime, that is if you keep abreast of the furious release activity as listed on the FdM incoming page. Admittedly we’ve already set aside a special place for a super limited Schizo Fun Addict occurrence, whilst elsewhere the new year is greeted with planned outings by Moloko+ and the pretty things. For Sendelica’s part, a revisit to the Mwnci studio last summer had them reacquainting themselves with the spirit of 2015’s ‘Cromlech Chronicles’ to pick up the threads where they left off and expand / utilise and harness upon the mystical vibe that the surrounding landscape afforded. ‘Cromlech Chronicles II’ is the resulting account. A much different Sendelica beast emerges, more considered, more earthy and hitherto, more in touch with the elements, at least that’s what comes across upon hearing ‘ripples of the magaliths’. An atmospheric titan, it finds Sendelica turning an acute musical curve, where once these reviews would be peppered with descriptions such as bonged and beardy, they now freely express themselves in a narration more alluding to the land. For here there’s a gentle ascendancy that’s spiritually bewitching, its atmospheric charging adored in pastoral whispers and woodland coos, the way it takes an age to stir from its sleepy headed slumber as though engulfed in a magical snoozing fog, its chamber curvatures woozily weaving to an alluring yet primitively snaking mystic tongue. It’s both an eclectic and ethereal craft whose spellbinding charm is optimised by the skulking off in search of a quiet space for intimate listening through headphones thus blocking out clutter of modern day life. As ever ‘Cromlech Chronicles II’ comes pressed up in various limited editions, the most eye watering of which, the usual unfathomably wowing band / label cobbled together box set which includes – wait for it – t-shirt, live DVD, make your own dream catcher, poster, build your own chocolate cromlech, a seven inch single, a set of 5 7 inch prints and of course the album – coloured and housed in a gatefold sleeve and you thought the Chemistry Set special edition was beyond belief. https://sendelica.bandcamp.com/album/cromlech-chronicles-ii 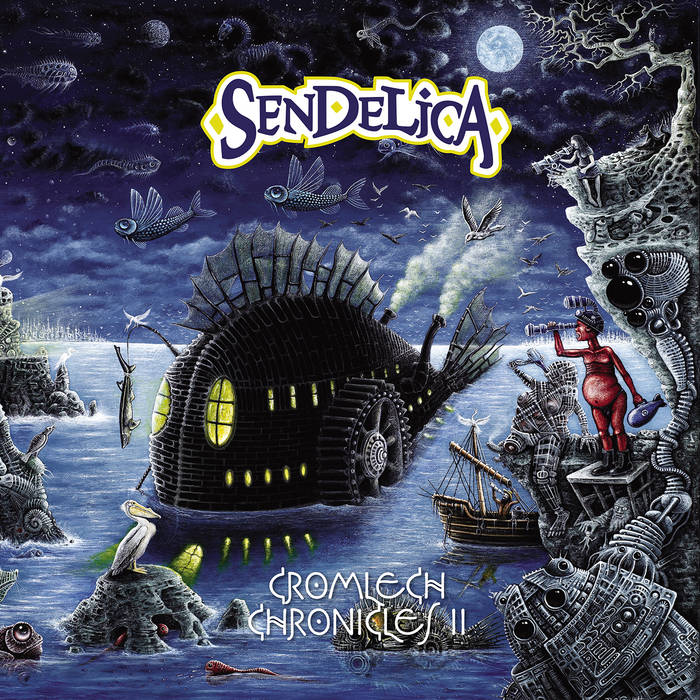