Posted on October 30, 2017 by marklosingtoday

I don’t mind admitting that there are still tears a rolling at missing out on this. Alas long since sold out of its limited cassette pressing, copies pretty much disappearing off the racks before the recent Cassette Store Day frivolities were in full swing. Mentioned in previous dispatches – somewhere here in fact https://marklosingtoday.wordpress.com/2017/10/14/wiitches-halloween-brew/ – this is Burning Witches’ Halloween gathering. A frankly faultless 19 strong gathering for a sonic séance of vintage electronic class and something which ought by rights, to be on the radar of those among you subscribing at one time or another, to the sound houses of both Polytechnic Youth and the Weird imprint of NY. As ever, we are dogged by time constraints, so apologies to those that we overlook on this occasion, fear not as I suspect you will get your well-deserved moment in the sun in future missives. So, without further ado, first up on the inspection table Joel Grind’s ‘a face in the fog’ sumptuously fuses a curious shadow falling brooding that manages to craft a hybrid sound from both Carpenter and Howarth’s ‘escape from New York’ to flavour it in the lightness of touch by Harold Faltermayer. Repeated viewing’s ‘dawn’ is sumptuously time locked in an austere futuristic aura that owes much to a mark 1 Human League, pulsing waves of AI choral consciousness weaved delicately around a spectral webbing whose initial darkening fractures to radiate to the sonic tongue of Vangelis. Ascending a sound trajectory more in tune with the much admired Polypores, burning tapes’ serve up the brooding wasteland of machine world surveillance courtesy of the future visions foretold by ‘kiva’. Talking of polypores, did we imagine it, or did we indeed read somewhere that this next chap appeared alongside the polypore one for a recent live event, anyway Thomas Ragdale features here in his own right with the tearfully enigmatic and majestic end game that is ‘credo’ into the bargain crafting something that sounds like a post-apocalyptic scene of landscapes surrendering beneath the nuclear melt of fire scorched atomic skies, incidentally very serene and dreamy. Chilling cold war stillness or so you might think on initially encountering Deathcourt in Silicon Valley’s ‘leather death’, but give it time, because as though trying to acclimatise itself to its surroundings, this hushed orbital herald emerges from the lunar shadows softly spreading and extending its spectral beauty before slipping back into the darkness and gone. Wonderfully juxtaposed between the classicist spheres of pure kosmische and a vintage VHS 80’s sound palette, Ian Alex Mac’s ‘the homecoming’ sublimely sling shots its way past the usual ‘stranger things’ attractions in favour of something more mercurial that’s caressed in the unassumingly sublime. Sounding as though they’ve sneaked in for a peak in at the inner sanctum of villa9 studio, all of them witches’ ‘return of the witches’ sumptuously relocates Carpenter and Howarth’s ‘Halloween III’ soundtrack into the macabrely murmured underworld of a lost Fulci creeper while certainly imbibed with the spooky spirit of the season, we here must admit something of a growing affection for Espectrostatic’s kooky ‘The Doom That Came To Marble Town’, both playful and sinister, it’s kissed with a peek-a-boo graveyard swing that if anything owes much to Raymond Scott’s powerhouse motifs. Those of you having tuned into Horror Sounds clearly perfect outing from Art of the Memory Palace last year, might do well to seek out Moon Gangs ‘dressed in red’, a wide screen hypno-grooved dream draped visitation whose mesmeric mosaics induce an oddly chill effected trip toning as though you’d foolishly super glued your head to the pulsing underside of a resting alien flying saucer. If you are the type that shivers to every creek, simply paralysed with fear as your hearing magnifies to hone in on every groan and yawn your surroundings make as they fall to slumber, then I’d  be inclined to skip hurriedly past Die Hexen’s aptly titled ‘haunt’ for in its chilling four minute visitation all manner of deathly manifestations delight in the still of the night, a distant cousin of Numan’s ‘Asylum’ with the psychological fear factor notched several levels, it devilishly stirs and prowls to patrol a netherworld caught for eternity between the living and the dead.  Essential in a word. https://burningallwitches.bandcamp.com/album/witches-halloween-brew 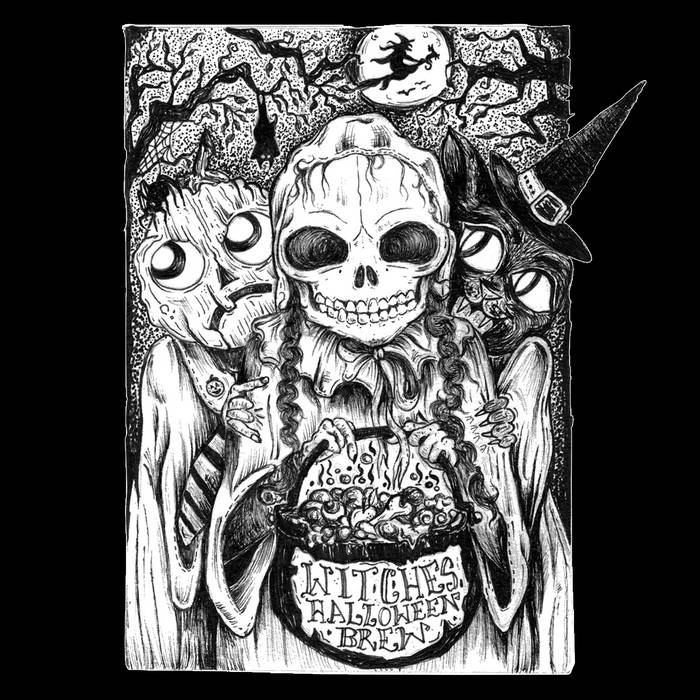