Posted on November 11, 2017 by marklosingtoday

those of you who keep abreast of such things, will be all too aware that the traditional season’s end Fruits de Mer celebrations are this year marked by not only a members only limited Schizo Fun Addict vinyl occurrence but also a split label co-outing with Eggs in Aspic. Following last year’s head to head with Static Caravan, its now the turn of Newcastle’s finest to step up to the plate with the release of a ridiculously limited two track cassette that features two lost gems from the vaults of the forgotten Moloko+. Now FdM regulars will be all to aware that head honcho Keith has something of a soft spot for these folks having issued ultra limited outings by them in recent memory, this one in fact will also be available in a strictly limited lathe pressing  available to subscribers of the labels members club. Just one cut on the preview playing, sent ahead doing the wowing duties, ‘bite the hand’ with its smokily crystalline chime charmed breeziness very much tuned into the sonic frequencies of the days jangle pop fraternity – see the Orchids, Trashcan Sinatras et al, yet cut away at the surface and something disarming, gritted and flavoured in a 60’s mistiness rises up through the grooves that initially hints of the Go Betweens before settling into a Long Ryders vibe possessed of hints of Buffalo Springfield. https://eggsinaspic.bandcamp.com/album/bite-the-hand 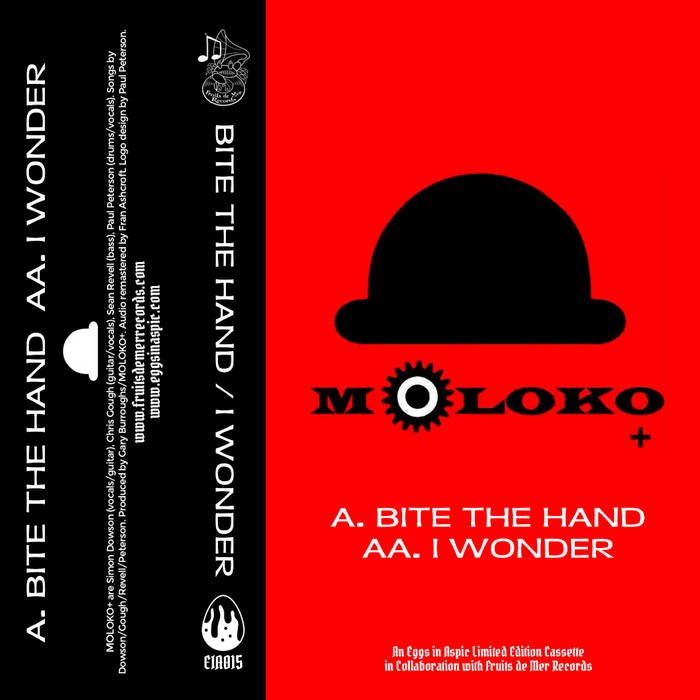 This entry was posted in groovy bastards..., Uncategorized and tagged eggs in aspic, fruits de mer, moloko. Bookmark the permalink.