Posted on June 6, 2018 by marklosingtoday

Been an age since we featured anything from the esteemed Trunk imprint, however spotted this on a recent jaunt to Probe records. Mind you pricey and all this following a spot of haggling over the latest Ace double ‘Bob Stanley & Pete Wiggs Present Paris In the Spring’ – over 30 notes, you kidding? So, there I am fresh from failed haggling yet not even blinking an eye when I spot this for the merest of spondoolies less. Not only is it a single disc but a single disc pressed on eye catching spidery blue and red webby coloured vinyl. Oh yea, there is your standard far cheaper black vinyl version, still a single disc mind, With all sense of reason and mind completely askew, you might well ask at this juncture, so why the grumpiness over the Ace double disc and the wilful extravagance of something on coloured vinyl. Well it’s goes simply like this, it’s a curio, a very special curio that forms a lost link to a forgotten childhood watching an animation series featuring an iconic web crawling comic hero, for this disc features the musical cues from the second season onwards, the master tapes from the first one being thought lost. Described as spy / detective jazz, the library recordings were sourced from rare KPM platters, the idea being to keep costs to a minimum, among the attractions, sounds by Syd Dale, Johnny Hawksworth, Bill Martin, Phil Coulter, Alan Hawkshaw and David Lindup (whose mooching ‘juggernaut’ is pure jazz noir while his ‘sixth sense’ is steeled with an air of Barry’s more spacier sonic plots for the Bond franchise) backdropped the action as our favourite web crawler battled a gathering of ne’er do well folk and various newspaper tyrants. As to the sounds themselves, it wasn’t always the good fighting the good and the bad, well – being bad, the animation series was littered in humorous asides a point perfectly mirrored by the kooky ‘Mr Chesterton’s Dog’ by Bill Martin and Phil Coulter and the frantically wiggy surf – a – delic hipster ‘the eyelash’ by Hawksworth. Somewhere else and perfectly courting that seedily shadow like underside of the night fallen metropolitan mean streets, Syd Dale’s ‘the hell raisers’ commences the action, an uber cool smoking slice of boogie succinctly nailing to the floor that sense of heady edge of anticipation and sleaze n’ seedy hiding around every corner in the shadows. Add to this there’s Dale’s menacing fuzz freak ‘walk in a nightmare’ while equally tasty is the shoe shuffling saunter of ‘walk and talk’ which by these ears, could have easily have fallen off the soundtrack for ‘Dr No’. fancy a little something slightly off register and devilishly darkly noir with an edgy and brooding psych touching, then we suggest you flick the stylus over Martin and Coulter’s ominously hallucinogenic ‘LSD’ though not before stopping by for a spell at both Mansfield’s ‘funky flight’ and Hawkshaw’s ‘raver’ – the former like it says on the tin lid a slinky slice of fringe flopping funkiness, the latter a liberal shot of snaking lounge jazz. Essential.

background story to the release and other such gubbins – here – https://trunkrecords.greedbag.com/buy/spider-jazz/ 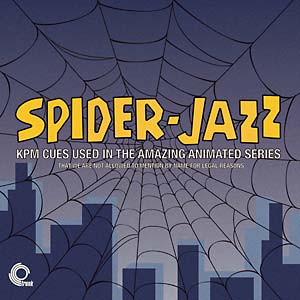 This entry was posted in groovy bastards..., Uncategorized and tagged spider jazz, trunk. Bookmark the permalink.