nathan hall and the sinister locals

Posted on July 4, 2018 by marklosingtoday

Listening first time through to ‘Tunguska Tydfil’, the second opus from Nathan Hall and the Sinister Locals, during what’s given to be an extended sabbatical from Soft Hearted Scientists, you’d be forgiven for thinking it was disconnected, without fluency or flow. Takes a while to realise these aural portraits are refracted memories, much like stills in a jumbled less ordered photograph album spiralling backwards and forwards through the ages. It’s this somewhat scattered crookedness that serves as part of the albums charm, one minute your reclining in a wistful wonderland fogbound by an autumnal haziness (as on the title track whereby seasoned in a lolloping waywardness that checks his former charges, a spectral resonance worthy of Nick Nicely albeit as though resulting from a long hazy night of good cheer and over generous scoops of wine with the Beta Band strays and stirs with peculiar oddness all the time quaintly doffing a cap to a ‘mother’s daughter and other songs’ era Tunng) the next seafaring dreamily to the mystical lair of Monsterism Island sharing watchman duties with the Beach Boys and the Superimposers (as hinted ‘sometimes I see you’). Unmistakably awash with the Hall DNA, ‘Tunguska Tydfil’ is peppered with familiar eccentric haunts, at once traced in fading nostalgia yet seductively spirited for the best part in a becoming baroque bucolic that hints of a kinship with a youthful Oddfellows Casino (none more so is this the case than on ‘windmills on fire’ and ‘side by side (glowing guide)’ which to this listener at least, had us dovetailing this with both ‘yellow belied wonderland’ and Beatglider’s criminally overlooked 2008 set ‘witches’ – something which every decent record loving home should possess) whilst the gallant, swash buckling harrumph of ‘glacial glare’ heavily hints of snatched moments listening intently to platters bearing the name of former Cardiacs’ man William D Drake. For us, on a purely personal note, we have something of a fondness for both ‘carnival of the damned’ and ‘song of a sourpuss’, the former an away day freak circus gathering oozed in spell charming pastorals and all manner of ne-er do welling souls gathered in a darkly mystical celebration with the latter a hypnotic rustic tethering, softly flashed in an alluring kaleidescopia of drifting and dissolving psychedelic hazes – gigglegoo’ by Freed Unit anyone? All said best moment by a furrow or two and a winding country lane, ‘The Phoenix of Albany Road’ arrives set in seductive sprays of baroque heraldry and a peppering of pristinely airy posies which combine gently to craft a disarming idyll that recalls the late Greg Lake. Incidentally, ‘Lock in at the ‘last chance saloon’’ is pure moon wiring club which all leads us to the sets conclusion. Just while you think you’ve mastered all the albums secret path ways, cul de sacs and hidden hidey holes, it goes and drops a parting surprise with the farewell wave of the quite frankly masterful ‘even this city won’t last’, never before and never will you again, I strongly suspect, hear Hall so openly vulnerable, intimate, reflective and sighed with a forlorn tear streaked crush. https://nathanhallandthesinisterlocals.bandcamp.com/album/tunguska-tydfil 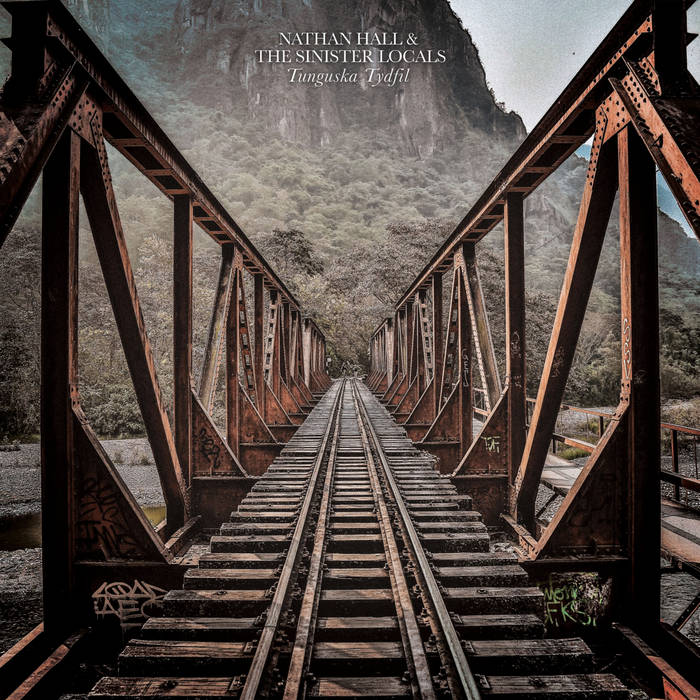 This entry was posted in groovy bastards..., Uncategorized and tagged nathan hall and the sinister locals. Bookmark the permalink.