Posted on November 9, 2018 by marklosingtoday

I think you can be rest assured that we’ll be returning to this with swift effect over the weekend, once that is the excitable tremors have ceased. literally just dropping upon our welcome mat, the emerging ‘Creeping Cinquefoil’ is a celebratory collection gathering together a whole host of oddness, hipness and grooviness from the record shelves of Buried Treasure’s past glories as they see out the year with party hats and candles to mark their 5th anniversary. an excellent set, which listened to in one sitting goes to prove the sheer eclectic taste of this most beloved of imprints oh and its impish disregard for fashion and want for keeping its listening audience on the back foot., a bit like Trunk but in place of subtle porn obsessions read days out at decommissioned nuclear bunkers. As said we will be back with this in a day or two, this just being a teaser taste steered by the handful of preview tracks you’ll find looming on the labels band camp preview page. we’ve always had a soft spot for ‘Judy switched on the TV’, the opening ambit pairing together the Dandelion Set and Alan Moore, a wonderfully bizarre slice of crookedness which all these years on, still has us bedevilled with surrealist flashbacks of some strange alternate universe where a mock Marlow-esque private eye Dick Spanner walks through a forever night world spawned from the contagion of the ‘Videodrome’ and William S Burroughs. those fancying your electronic sounds rippled in floaty bubbles of beguiled oceanic serene, might be advised to see out Anne Dudley’s quite exquisite lunar flotillas ‘bubblegum’, appearing on the recent Buried Treasure ‘moodsetters’ collection, it perhaps provided the collections best moment after that is, entries from Monica Beale and Alan Hawkshaw’s rare though brief visit. hauntingly beautifully, an escaped daydream sequence from Magnet’s ‘wicker man’ score as were, Revbjelde’s apparition like ‘Brigantia Lufian (For Albion)’ tip toes to a seductive serenade to reveal beneath its long flowing cloak of enchantment a positive cornucopia of demurred delights tailored in a timeless mystery and ghosted in a siren sighed woodland woozy. up next, some loose limbed hip wiggling wigged out library loveliness courtesy of Gerhard Narholz with ‘UFO Invasion’ – now this is bonged out and super chilled, cut by a cool cat with an impish line in the fuzzy, funky and flipped even comes with a brief and beautiful baroque sequence that screams to be heard. rounding out matters on this brief teaser tour, Revbjelde make a return appearance with Dolly Dolly in tow, spoken word detachment aligned to whispering waves of electronic disquiet, the effect icily stark, sombrely stilled and frost chilled with an advancing edgy eerie. https://buriedtreasure.bandcamp.com/album/creeping-cinquefoil 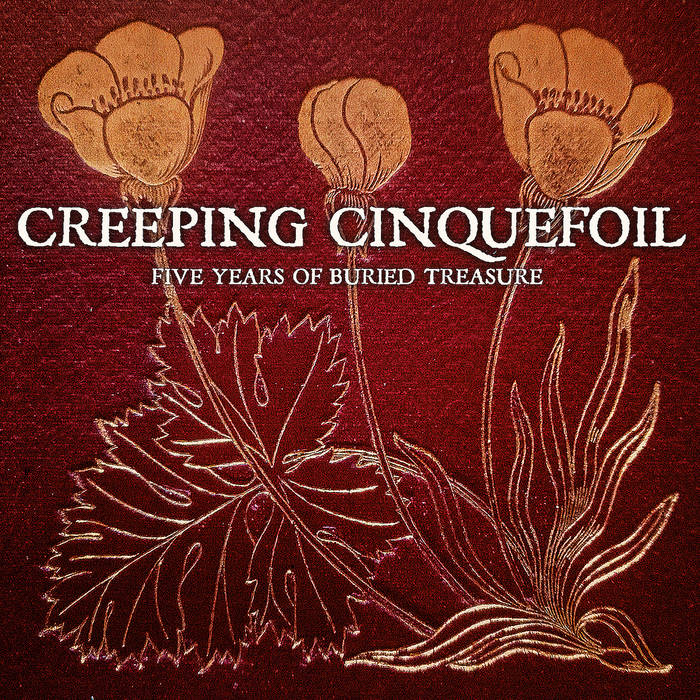