Posted on December 10, 2018 by marklosingtoday

Incoming on the uber cool ERR REC imprint ‘Library Vol​.​2 Science & Technology’, a homage of vintage sounds plucked from the silver of electronica as were, by some of the leading lights currently navigating the French underground. As ewer time poor here, we’ve been reluctantly aggrieved to find ourselves having to cherry pick the delights that have adored our listening first time of asking. Of course I’m playing with your heads, this set is so good, it’d be a task and a half to separate this lot, a bit like naming your favourite child truth be told. First to smitten, Abraham Civelli’s ‘Interaction Forte’, a dream weaving kosmische kutie that manages at various points to touch base with Broadcast, Beautify Junkyards, Stereolab and more besides whilst simultaneously possessed of a chic pop purity that hints of elements of Air in some hitherto radiant rapture with Jean Michel Jarre. I know I’m always namechecking the Bureau B imprint, usually with reference to their astute eye for a creative, so when I say Bernold Delgoda’s ‘Propergol‘ is something cutely cut from the Bureau B cloth then hopefully you’ll get my drift, in truth this sounds like its been drop kicked out of a smoky bliss groove studio headed up by the legendary Brain label, all rhythmic contortions, mutant and gloopy funk struck trip tones and a deft eye for a 70’s vintage. You’d be hard pushed to find a more aptly titled cut around here than Antonin Fortin’s ‘Le Ballet des Drones’, sumptuous slice of cosmic classicism, which aside sounding a little wonky and woozy, like a tinker-ish ‘Telstar’ on digitalis, is blessed with an adorably affectionate crush that imagines an orbital embrace between ISAN and Plone. ‘Protocole X’ on the other hand, incidentally by the same artist, is gorgeously woven upon a sparsely toned space spy electro noir framing replete with seductive funk bites. Somewhere else there’s the space walking serenade of Bertrand de Rombières ‘Hydrocarbures de Synthèse’ which in truth has a distant touch of a youthful Numan about its wares set to panoramic intensity which serves in sharp contrast to the lights lowered sultriness of the smoky orbital ‘Au Coeur de la Matière’. Jarre is again recalled by way of Etienne Vallino’s delightful Saturnian seaside promenade pretty ‘Paillasse Propre’, its acutely kooky phrasing sounding like the French electro wizard being re-tooled and re-tuned by an impish ‘Dots and Loops’ era Stereolab while moving a little further down the track listing you’ll be seduced by cosmic minimalism of ‘Cristallographie‘ which unless ears do deceive, locates itself somewhere between the Barrons – Louis and Bebe and Raymond Scott. I must admit as a younger self, anything remotely electronic in sonic nature sounding remotely like La Plongée’s ‘La Face Cachée’ would have had us camping outside our local record emporium with impatient expectation in so much as that dilution of classical lines, that sense of mysterious futuristic unworldliness, elevating peaks of glassy euphoria and sheer overall amorphous astral adventure. Utterly perfect in a world. Sounding as though they’ve sneaked into an early 80’s studio and been caught tinkering with the late Pete Shelley’s ‘homosapien’ sound set up, this is Tiger Tigre with ‘Trou Noir’ which by these well-worn ears sounds like pristinely turned pure ‘Scene 30’ era Echoboy. Then there’s the ethereal vision that is Klaus-Ulrich Hermann’s starry serenade ‘Nucléons’ all radiantly festooned in demurring lunar pastorals which if truth to be told had us with half a mind to go seeking out Stereolab’s adored ‘cobra and phases….’ full length for likely kinship. Those among you who adore your listening treats as though lonesome lulling fanfares transmitting from a forgotten and somewhat abandoned galactic post at the far edges of the known cosmos might do well to seek out Amosphère’s ‘TiO2’ at your earliest convenience. Similarly touched and sprinkled in star dust Henri Pierre’s ‘Les Radiations de Solovieï’ is blessed with the kind of twinkling jubilance that had us imagining it was the result of a secret tryst between Plaid and the Boards of Canada. Lest we forget to mention Gianni Moretto’s teasingly brief ‘Collapsologie’ which opens the collection, in short something of a cosmic rhapsody while at the other end Pierric Gildas’ sultry nocturnal ‘Transition Energétique’ brings matters to a close on this superb set and into the bargain demurs with a tad warped and wonky motif that suggests the master tapes being left out in the sun. https://err-rec.bandcamp.com/album/err-rec-library-vol-2-science-technology 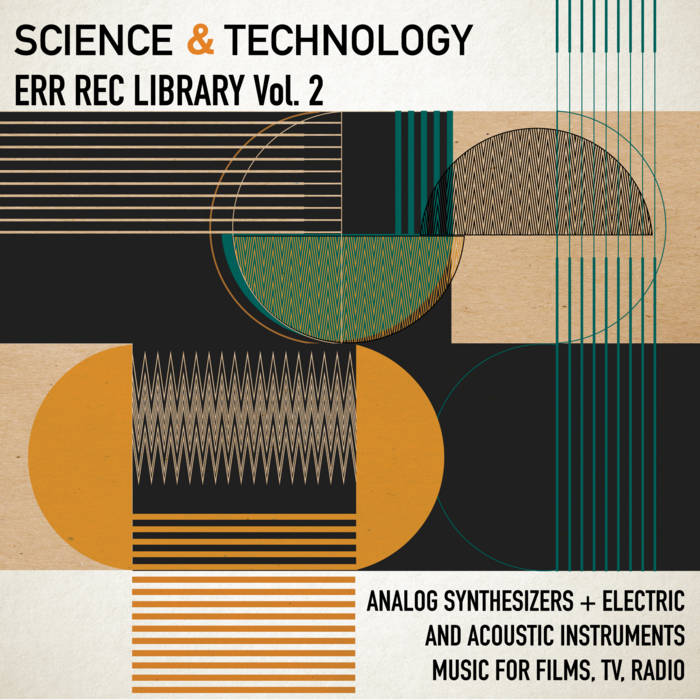