Posted on January 4, 2019 by marklosingtoday

Think we may have mentioned in some place or other that there was Prana Crafter to come and indeed here they are, two tracks as a matter of fact sitting prettily on a cassette compilation, of which there are just 60 copies, put out by Hypnic Jerk entitled ‘splixtape’. Five tracks on the bandcamp preview page, which frustratingly for now, we are having to rely on since our fantastically stroppy laptop decidedly to cause an issue with zip files (yes we’ve tried everything redownloading win zip once expired, 7zip etc….) so you may have to hang on a tad if you’ve sent files while we go a tinkering. Anyhow as said, two tracks from the Prana Crafter one, first of which is ‘creek born mind’, the shortest of the two as things would have it, a slow and intimate unwinding desert echo, a lone star cooled with a stirring though albeit stilled atmospheric that simultaneously touches base with both Ry Cooder and Godspeed, the latter’s influence falling away the deeper in the track digs for then a stoner smoked calm before the storm is channelled that much recalls ‘True’ era Montgomery / Heaphy. That said it takes the mellowed and lengthier titled ‘Daydream in the Arvo Sun (Vision of Captain Trips Cruisin’ Shotgun in Sun Ra’s Ship)’ for the Prana one to really set out his stall and kick into his bliss cooled groove whilst similarly revealing his knack of occupying an insular space in the great psych firmament located on the very edges of sonic spectrum, from wherein like a Magpie, he’s able to subtly draw what he needs from others and wire those elements into his own eclectic image, all of which, here you’ll find elements of the Frond, Young and the mighty Bardo Pond spooled into his reality warping realms of wyrd vagueness. Equally tasty here,  ragenap might well deserve a little patient chasing if ‘mag-nette drags thru’ hints at the standard they set for themselves, granted it takes an age to blossom, but stay with it for this gem takes you on a journey, granted that journey is inwards into your inner space still, we can’t think right at this moment of a better way to bliss away 13 minutes. Opens to a murmuring meander, a needle lite snaking trail leads down a path of genteel mellowness before pausing a moment at some portal through which, to the ethereal hum of a silvery pulsar, lulls you in a white room serene, very transcendental and trippy as the reverse looped mystic eastern charms set to work weaving their hazy hallucinogenia much like some hulking mind erasing dream machine. Not to be outdone, Tarotplane serve up the monumentally majestic ‘The Hallelujah Rain, Or Sky Mountain & Masking Tape in Endless Agreement’ – I guess at this point you might be advised to skin up for this is so old school vintage chem-rock / ambience that we’ve happened upon several quick glances to make sure it isn’t some recent vault discovered lost nugget from the Brain or Vertigo catalogues of the 70’s. a graceful slow moving colossus, very trancey with just a touch of the Tangerine’s dream weaved drift smoke attaching to its lonesome core, its unnerving serene state both stately and spacey comes bruised with a melancholic scratching with an understated beauty rising from beneath its bonged out woozy revealing an affectionate and amorphous airy astral spirit walking the celestial voids. Last up for this formidable gathering, Horse Apples with ‘A, C, A, C, A, C, A, C, B (x4)’ which on first encounter we suggest you don your headphones for, that way free from external distractions and life’s temptations, you can simply dive in to its floaty seas of sonic shape shifts and lose yourself in its hermetically sealed lysergic inner space. A murmuring kosmische that had us recalling a super chilled Craig Padilla if truth be known and certainly something ripely primed for those of you adoring your sounds trimmed and tripped in cosmic flotillas and all manner of inner self recharging. https://hypnicjerktapes.bandcamp.com/album/splixtape 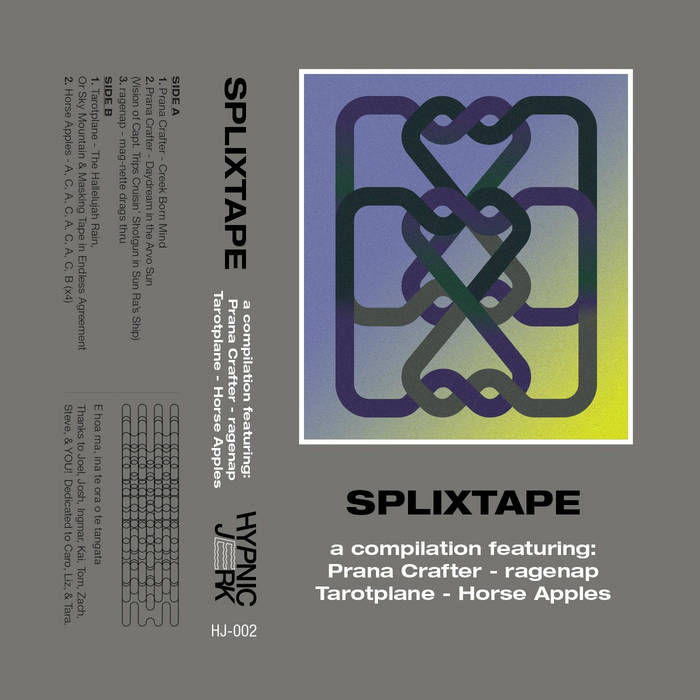